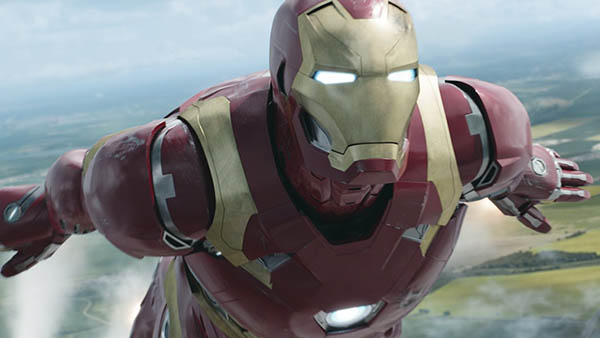 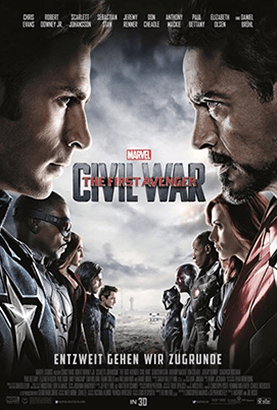 Who needs a villain when you have Steve and Tony? Both protagonists. Both antagonists. And drawing other power-people to their cause in surprising ways. The clashes go far beyond the set-up squabbles of Avengers Assemble. Or even that other big 2016 superhero showdown. Forget Batman v Superman. Here you get Ant-Man v Spider-Man, Hawkeye v Black Widow, Scarlet Witch v Vision, The Winter Soldier v Black Panther and (well, duh) Captain America v Iron Man, all rolled into one. And that is what you call the ultimate Marvel superhero event. Matching its blockbuster scale and spectacle with the smarts of a great, grown-up thriller, *Captain America: Civil War* is Marvel Studios’ finest film yet. There. We said it again. [5*]

That epic runtime is the only problem. It’s generally well-paced, but there’s one too many plot swerves as you wait for the gang to suit up and throw down. There’s also a slightly icky and completely unnecessary romantic beat that torpedoes the MCU’s best love story, and it’s a shame that the trailers (and LEGO) gave away quite so many of the film’s surprises. If there’s a risk of the Marvel ‘formula’ becoming stale, there isn’t any evidence of that here. Civil War isn’t just a damn-near-perfect popcorn crowd-pleaser; it doesn’t offer any easy answers for its combatants, or the world going forward. Team Cap or Team Iron Man? The real winner here is Team Marvel. [5*]

Arriving so quickly on the heels of “Batman v Superman: Dawn of Justice,” there’s a temptation to treat this Marvel sequel as a rebuttal to DC’s recent effort. The pitched battle between two primary heroes, set against the backdrop of a world concerned about super-powered accountability, is remarkably similar. However, the two films are couldn’t be more different in their perspectives and methods. ‚Civil War‘ is effective thanks to a focus on character, with the film’s extended roster serving to explore and underline absorbing ideas about family, friendship, and the use of power. As big as this movie is, “Captain America: Civil War” thrives on a smaller, human scale. Striking and consistently engaging, the Russos deftly craft compelling blockbuster entertainment out of a a moral and emotional conflict, and that’s more impressive than any overblown display of loud and vulgar power. [A-]

Call it “civil war” or call it brand extension; call it a “cinematic universe” or a corporate behemoth — the latest Marvel extravaganza furthers the studio’s cross-pollination of action franchises in a way that’s sure to satisfy devotees. Posing serious questions about violence and vigilantism while reveling in both, Captain America: Civil War is overlong but surprisingly light on its feet. It builds upon the plotlines of previous Avengers outings, bringing together known marquee quantities and introducing the Black Panther and a new Spidey in winning fashion.

Captain America: Civil War feels like a pinnacle for Marvel. Like, I can’t imagine their movies getting any better. This feels like the crescendo. This feels like the movie this series has been building towards for eight years. After all these movies, Marvel earned this fight. This is the best Marvel movie so far. This is not hyperbole. I have my doubts they can make anything better. This is as close as things come to “superhero movie perfection.” This movie made me really happy.

In the almost-too-smooth fashion that has come to define even Marvel’s non-Joss Whedon-directed entries, a steady undercurrent of droll, wisecracking humor punctures the tension at key intervals, to continually amusing if somewhat ingratiating effect; it’s a bit deflating when Iron Man at one point actually invokes “The Manchurian Candidate,” rather than simply allowing the obvious reference to speak for itself. All of which is to say that this clean-burning cinematic engine may qualify as a peak Marvel experience, but it isn’t a transcendent one; transcendence simply doesn’t factor into the calculations of a franchise dedicated more to its long-term survival strategy than to the quality of any individual chapter. “Captain America: Civil War” doesn’t break the mold; it burnishes the brand, and sets a high but not insurmountable bar. Let the games continue.

Featuring what’s arguably the best ever screen depiction of Spider-Man as well as a cool new hero in Black Panther, Captain America: Civil War can’t quite recapture the emotional and cerebral strengths of its predecessor, The Winter Soldier. Its central villain is ultimately lackluster and its final act, while dramatic, lacks the energy and effectiveness of the central action set-piece that assembles the Avengers in instant-classic fashion. [7.8]

Between the political issues, explosive battles and a nefarious plot by new villain-on-the-scene Helmut Zemo (Daniel Brühl), Civil War is overflowing with story. It’s a gold mine for Marvel nerds that may be dizzying for the rest. Yet the central conflict between superfriends Steve and Tony stays in focus, even escalating in a real and tragic way as the plot progresses and weaves in Winter Soldier’s history of breaking bad to tear them apart even further. Rather than rooting for the fisticuffs, it hurts to watch these men, brothers in a sense, punch and blast each other into oblivion — a testament to two actors totally on their game but also to audiences’ investment in these characters paying off in dramatic fashion.

The film tangles itself up with fears of endless war and the annihilation of innocent humanity, and in doing so it continues to validate the ongoing series. It’s a fact of movie history that films are created as both a response to, and a product of, the larger world. And superhero movies, which are the current cinema’s site of obsession over anxiety-making issues of global safety, must continue to address the unthinkable if they’re to be more valuable to culture than mere moneymaking products on an assembly line, or retreats into childhood nostalgia that only pretend to be making sense of the environment that produces them. “Civil War” strikes that admirable balance: serious-minded action that never forgets to indulge in serious fun.

The First Avenger – Civil War | „The Past is Prelude“ Trailer